OUT OF NOW / resumption, Ausland | Berlin


In the composition OUT OF NOW possible.movement researchs time structures of different movement patterns, sounds, lines and of different states of the body. The diviation between synchronous and nonsynchronous sequences is a matter of particular interest for the artists. Within the sounds, movements and graphics of the performance the single beat/pulse becomes the base of rhythmical textures. These beats and pulses condense into a complexe progression of actions and then dissosiate again into single beats, pulses, lines or planes …

In OUT OF NOW possible.movement search for an other practice of performative cooperation between different art forms: On stage they establish a state of equality between things artforms and performers. During their performance they open a space, where every performer, every picture, every object and every instrument has the same status. In a certain way the piece is about reducing the complex artificial configuration of appearances on stage in order to readjust it to the actual neutrality of nature.

The piece was especially produced for the stage in Ausland. 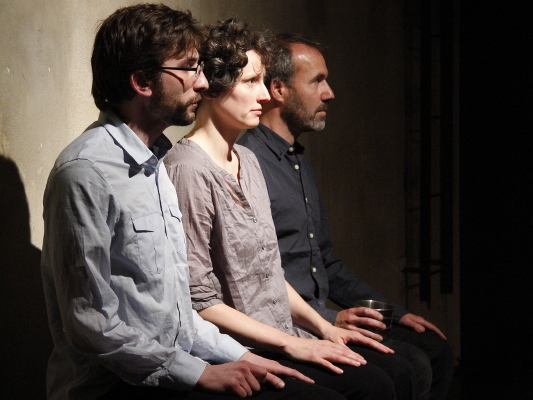